Technological advancements are being discovered daily, and when it comes to renewable energy harvesting, the speed of results are astonishing.  A major driving force behind these advancements was the Climate change act 2008 (discussed in the previous blog), generally known as the ‘Paris deal’ where the agreement was signed in 2015. Almost 200 countries pledged to reduce CO2 pollution (-80%) by 2050.

Current levels of pollution are at an all-time high, and since 2001 we have witnessed 14 of the 15 hottest years on record.  The world economic forum claims, “That the heat being trapped in the atmosphere by man-made pollution is the equivalent of 400,000 Hiroshima atomic bombs exploding every day of every year!” – only the heat energy, not the radiation it would emit. The level of CO2 has now reached over 400 parts per million (ppm) which is, according to many scientists “the tipping point”- not witnessed since 3-4 million years ago; predating mankind – when the arctic was 8 degrees warmer than it is now. The consequences of this have been catastrophic; between 2003 – 2009 269 billion tonnes of ice has melted from glaciers each year and this number continues to grow.  Surprisingly, 85% of global energy burned annually comes from Carbon based fuel, adding to the build-up.

Britain can boast ‘Europe’s largest floating solar farm’ (situated in a reservoir near Heathrow) and recently became the world’s third-largest market for large-scale solar parks after China and the US.

Despite all the evidence pointing towards investment into renewable technologies (wind, solar etc.) to achieve the 80% reduction in Carbon emissions by 2050 (Paris deal), the UK has made a significant investment with nuclear power generation, through the subsidies it has promised to nuclear projects.  The Financial Times reported that 25% of electricity generated in 2015 came from renewables, a massive improvement from 2011 when only 9% came from the same sources –   placing Britain not far behind Germany (the home of ‘the green power revolution’ or Energiewende) – who generated around 33% of their electricity from renewables, rather than outdated nuclear power.

Following the Paris deal it was assumed that the UK would continue to support and invest in the renewable sector.  However recent changes by the government have rather unsettled the UK renewables industry, as a seemingly contradictory decision has instead been made to reduce subsidies given to renewable energy projects, to apparently “minimise higher energy bills for consumers”.  A recent consequence of this has seen 2 solar companies going into administration with more expected to follow, something that shouldn’t be happening to a vital industry that employed more than 112,000 people in 2014.

Unfortunately, though Britain appears to be doing well with regards to renewable energy innovation, we are somewhat lacking the intelligence from our policy makers to make the right decisions, and in the worst case could force investment away leaving people jobless in the process.

The reduction in renewables subsidies comes as a shock considering the astronomical subsidies promised to the Hinkley C project (2 ½ times more than the current cost of power generation).  It doesn’t add up!

For the first time in history, in 2015, investment in renewables made by developing and emerging economies was significantly higher than investments made by developed countries – $156 billion compared to $130 billion.

The chart below represents the top spending developing & developed countries – highlighting their investments into renewables. (The numbers refer to $Billion) 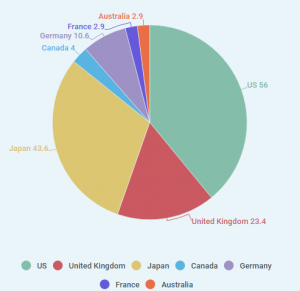 Investments from emerging economies, clearly demonstrates their common sense approach to reducing climate change thereby simultaneously creating a sustainable future.  There is still much to be done, renewable energy only accounts for 23% of global electricity production.

With more support from governments and policy makers the renewables revolution can really catch wind, making the advancements required to slow, and then arrest man-made climate change.

Are you a candidate looking for a new role?

See Resources Submit CV
We use cookies to ensure that we give you the best experience on our website. If you continue to use this site we will assume that you are happy with it.Ok